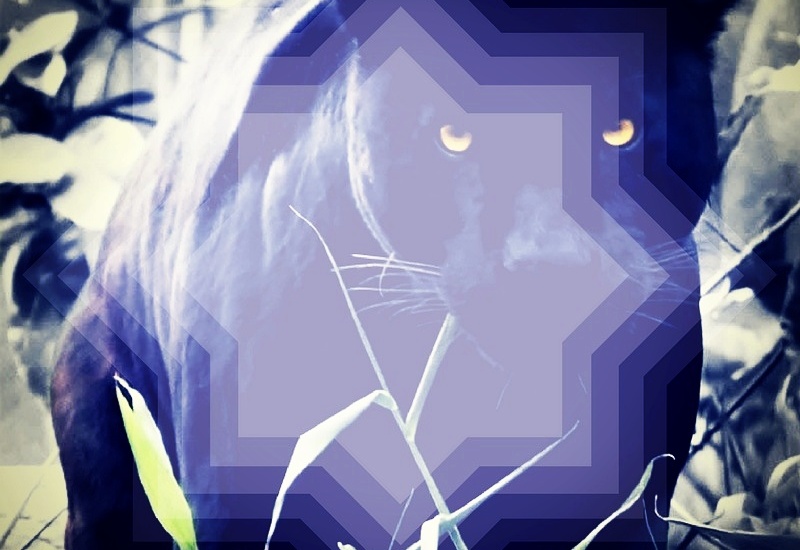 Transpersonal experiences can verge on being ineffable, but I’ll do my best to relay a recent one. Because I want to be clear about what I mean when I say that working in a “transpersonal” way can be helpful. I can talk circles around the concept all day long, but there is nothing better than a true life story to really home in on what I’m getting at.

A few years ago I was helped by a black jaguar. Really. It occurred during a Holotropic Breathwork (HB) module in Joshua Tree, CA, but it was as real, maybe even more real, than when I encounter strangers on the street.

HB is a powerful psychospiritual technique that involves altering one’s breathing pattern combined with evocative music, stellar facilitators and trained helpers, bodywork, and the best communal support I have ever experienced. At this time in my life, Pluto was conjunct my natal South Node, which triggered a series of brutal past life memories.

Now, at this time I also didn’t necessarily believe in past lives. It was a concept that I entertained in thought and theory, but it mostly felt like wishful thinking or fantasy. A wide range of experiences and insights began to prove otherwise, though. At the very least, it was enough to fully convince me that I have lived many times before, and that I was unconsciously carrying trauma from those lives that was deeply impacting who I am and how I lived my life. I do not think past lives are unusual; I think they are normal and a natural part of life on this planet. What may be unusual, at least in our American culture, is actually having them come to consciousness and then working with them in a psychospiritual context.

Hopefully, transpersonal practices, research, and theory will change what is commonly known, honored, and accepted. It is this hope that fuels me and many others to pursue and live such fringe, unconventional interests and explorations, despite the criticism that sometimes comes our way. But back to the story…

So, I was in a HB process in Joshua Tree. I was having a vivid re-experiencing of a past life in which I was tortured. I knew I had been involved in some sort of radical, revolutionary movement. Somehow, I had been captured. I couldn’t access most of the specifics, but I felt deep, deep betrayal. I knew a brother-like character had given me away– that I had been sacrificed for the cause. The scene was dark and macabre. My jaw was repeatedly broken, which was excruciating. I was kept on the brink of death but not allowed to die. It seemed to stretch on forever. I cycled through massive waves of grief, fear, and anger. For those who know the archetypes of astrology, you will recognize the massive Plutonian themes.

After what seemed like ages, I began to beg for release. Crying. Screaming. Pleading for death. Engulfed in darkness, I began to feel defeat.

And then She appeared. A massive black jaguar.

She circled the room, large paws silent along the floor, eyes glowing gold in the dark. I watched her, unsure if I should be afraid or relieved. She calmly approached and placed her forehead against mine. And then we merged. With Her came the most primal ferocity I have ever felt. She/I was never going to give up. She/I knew how to protect and preserve me. I saw flashes of scenes from my current life and felt an understanding of how they connected to other lives. And She remained with me as I cycled into and out of more torturous scenes for hours. She remained with me as I flew home after the module.

When I returned home, my 5-year-old spontaneously began referring to me as “Mama Cat.” Of course, I hadn’t told her what had happened. But she knew. On some level, she immediately recognized and appropriately responded. For months afterwards I had many black jaguar encounters– on t-shirts, in artwork, in dreams, in stories, and in countless other ways. And in the years to follow, She’d make an appearance every now and then.

Fast forward a few years to the present, and I haven’t encountered black jaguar in awhile. I know she’s part of me, but she’s been sleeping. Then, last night happened.

I finished the final chapter of a Choctaw book, How I Became A Ghost: A Choctaw Trail of Tears Story by Tim Tingle. The book cover had struck me when we received the book as a gift, but I found myself mesmerized by it as the full “Super Blue Blood Moon” rose in the Oregon sky.

The story had reminded me of the strength and perseverance of my Choctaw ancestors. I reflected on my life. How do I honor my ancestors? Do I live my life fully enough? Boldly enough? I thought about the fear I felt as I launched a new website and new social media engagement. I had spent weeks walking an edge of fear– fear of being seen, fear of being heard, fear of people knowing who I really am, fear of being rejected or misunderstood.

My jaw felt tight. I sighed and reached for my phone. I figured I was processing enough, so I got on good ol’ Facebook for a reprieve. Ha! That’s when things got REALLY real– a synchronicity sparked and reeled me in deeper.

The first thing to catch my eye was a BBC post, which you can watch here. The post is about indigenous people who were stolen from their homes as children and displaced into new homes without their families. This happened in France between 1963 and 1982. Within my lifetime.

The story hit on a huge ancestral nerve. My ancestors were forcibly removed from their homelands. Horrendous things have been done to enforce assimilation– genocide, forced & unconsented sterilization, removal of children from families to boarding schools and white households, and on, and on, and on, and on. Many of these things happened within my mother’s lifetime. I can trace the effects into my current now. This is something I have long been actively processing and healing.

I suddenly felt it all again. The anger of being told things like, “You should go back to your own country.” A comment flung by an ignorant southern grade school classmate who assumed I was of Hispanic descent. Or the time a European American woman corrected me at grad school in California when I told her I am Native American– “First Nations. First Nations is the correct way of saying it.” Or the times people say, “Oh, I just think of you as white,” when I have skin that browns in minutes of sunlight. Or the nebulous confusion I felt as a child, asking my Native mother which category to fill in on standardized tests. In anger, inflamed from her own wounding from racism and displacement, she growled, “WHITE! You are white, and don’t ever let anyone tell you otherwise!” And it was true. I am also of European American descent. I have my dad’s blue eyes. But just because I’m white doesn’t mean I’m not Native. One does not negate the other. Also bubbling up was how I sometimes doubt myself when I say I am Native because I didn’t grow up on a reservation. And how all of this had led me to spend years researching Native American displacement. I even wrote my Master’s thesis on it. I called it Claiming Voice & Visibility From the In-between (2012)!

I watched the BBC video and felt jealous that I won’t ever meet my biological maternal grandparents. There is no coming home to the sacred homelands for me. I have unusual experiences all the time that I have come to realize are pretty normal in many indigenous communities. But it was this perceived abnormality that led me to pursue the roads of study I’ve traveled in desperate attempts to make sense of myself and my perceptions of the world and cosmos. I’ve studied energy healing. Psychology (to the Nth degree). Shamanism. Hinduism. Dreamwork. Astrology. Cosmology. Women’s spirituality. Feminism. Religion. Mythology. Research. Indigenous studies. Archaeology. Creativity. Birth. Death. Ancestors. Consciousness. Music. Healing.

Every day I hide that I have spent decades devoting myself to these explorations. I generally feel out of place in the world. The things I like to talk about are way too heavy for most people’s comfort.

So, all this was swirling and stirred, and there’s that fierce black jaguar looking me in the eye with the super blue blood moon overhead, and I wanted to roar. I cried. And I prayed. And I journaled and meditated. And I told myself, “Your ancestors didn’t survive all that hellishness for you to be weak and wounded. Get to your feet. Bare your teeth if you must. And get down to business. You didn’t come here to mess around.”

And today I learned that the jaguar’s jaw is the strongest of all the big cats. She prefers to hunt by shattering skulls. I spent some time marveling at videos of black jaguars, nearly in tears by their combined strength, grace, and beauty. Some were angrily pent up in cages. Some rested and played. Some swam across mighty rivers. I was spellbound with honor and respect. And then I channeled the energy and wrote this piece.

And that, my friends, is a taste of my own transpersonal process. I would love to witness your own process. I can be contacted at this link. Thank you for reading my story. 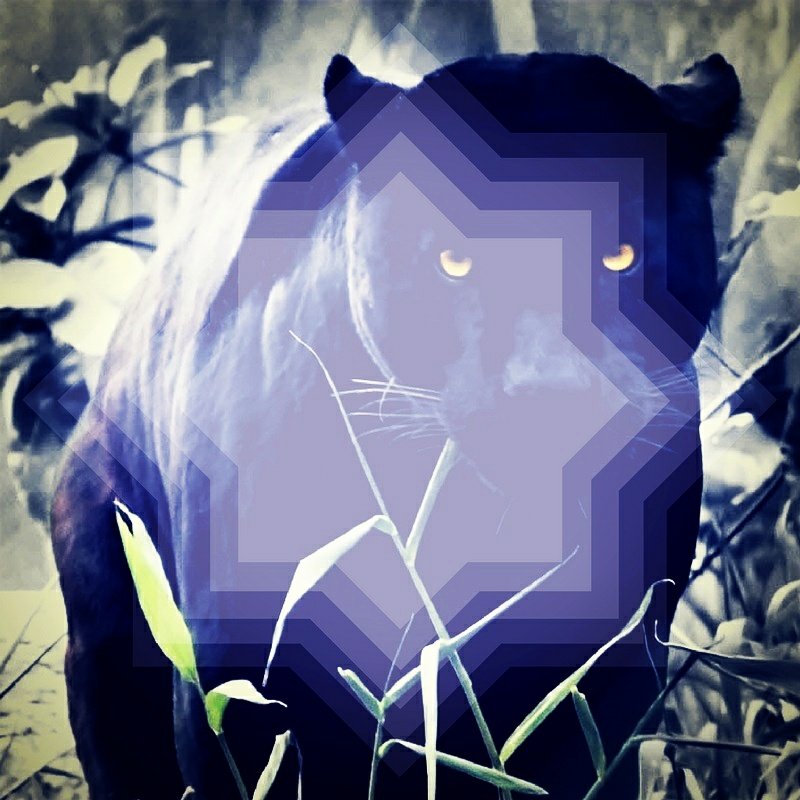 Amber R. Balk, Ph.D. is a transpersonal educator, writer, researcher, and independent consultant who combines diverse educational and professional backgrounds to provide well-rounded and unique individual and group psychospiritual services. She can be contacted at dr.amberbalk@gmail.com.